Tons of thought goes into how to safely protect images for any professional photographer. Consideration is given to image protection when shooting, photo archive back-up, and even protection against hazard using cloud storage. For the digital photographer, any concerns usually stops there. However, for the hybrid or film photographer, film must be shipped to their photo lab for processing. This extra step can bring with it extra risk. But there are steps you can take to mitigate this risk. In the video below, I cover how to safely ship film to your lab.

The steps aren’t about choosing the best shipping company. I’ve heard so many people complain about FedEx, UPS, and USPS. Fact is, they’re all the same. Each shipping company delivers regularly and occasionally has issues. Choosing one company over another really won’t make a difference. Instead, mitigating risk is done how you pack and address the shipment. Here are some top tips from the video:

How to safely ship film really boils down to ensuring the shipping company can easily read the intended destination. Equally important is choosing a good photo lab that will treat your film well.

From time to time, I get an itch to produce tutorials for fellow photographers. It usually starts with a Facebook post asking a question, or a friend seeking help. In one of my favorite Facebook groups, I’ve recently noticed a lot of questions about how to use an external light meter with film.

It’s so much easier for me to record a short video to demonstrate my techniques. So in the video below I quickly cover how to use an external light meter with film. However, the video isn’t specific to film. I also cover how I use the same meter for digital photography. The video is specific to color film, as black and white film is a little different. Once I got used to using an external light meter, it quickly became part of my regular arsenal. I pretty much never work without a light meter.

I also take some time to cover mistakes people commonly make when using an external light meter. Keep in mind that there are as many ways to meter as there are photographers. What I describe is my method for metering. There are many other methods that work well for other photographers. That being said, there definitely are bad methods too. Just find the best metering method for you.

Let’s face it – Lightroom is a two faced beast. Like the Roman god Janus, Lightroom presents photographers with two distinctly different faces. On the one side, Lightroom contains some amazing functionality. For a wedding photographer, Lightroom contains 90-95% of what you would want for photo editing and digital asset management. I would even argue Lightroom has too much functionality (book module…anyone, anyone?). On the other side lies Lightroom’s problem. Ever since Lightroom 3, application performance has deteriorate. Import, culling, sorting, editing and exporting have all become dog slow functions. So, professional photographers live with a two-sided compromise – love the functionality, hate the performance. If you love Lightroom’s functionality, but crave more speed, then read on.

Before I jump into a bunch of suggestions for changing things around, let me first familiarize you with my setup. I am going to use my setup as an example to help illustrate my points. I’ll be the first to admit that my brand new 2013 Mac Pro is not representative of most users. That’s OK, it’s only being used for an example, and not for benchmarking. In fact, you’ll find no benchmarks here (more on that in a moment). 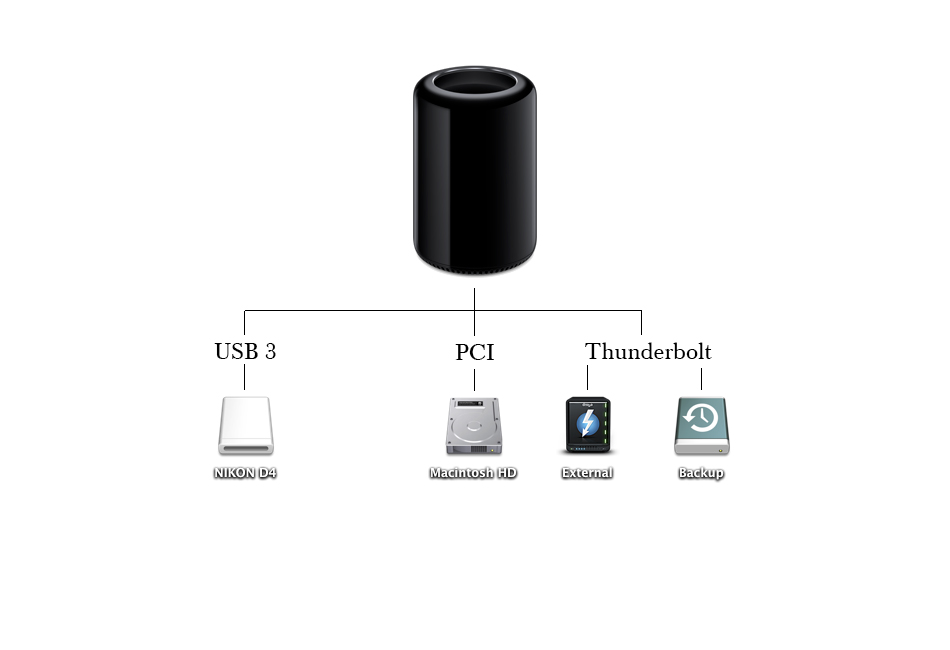 What’s important to note about my system is the various disc types and how they’re connected to the computer. Nikon D4 is a memory card reader simply connected by USB3. Nearly all photographers would import photos in this manner. Macintosh HD is a PCI-connected SSD drive. By far, this is the fastest drive on the system (nearly 1,000 MB/s), but it’s also the smallest and most costly. External is a huge Drobo 5D storage array connected via Thunderbolt. The Thunderbolt connection is fast and the Drobo is the largest disc. Backup is also connected via Thunderbolt. It’s not the largest or the fastest, but it’s just for backup.

Correctly choosing where to store Lightroom data can have a large impact on speed. Through lot’s of reading and some extensive testing, I’ve arrived at a solution that works well for me, and should work well for most. I’m not including benchmarks because everyone has different systems and discs, so a benchmark just wouldn’t make any comparative sense. Instead, I’ll explain the theory below. But first, recommendations for where to store what –

As you can see above, I import via a USB3 card reader directly to the “Ingest” folder on the External drive. After I cull the photos to identify the selects, I import them via Lightroom 5, which moves the selects to the main Photos folder. This also loads up the Lightroom Catalog and Lightroom Cache with info on the new photos. Because my Macintosh HD drive is the fastest, my Lightroom catalogs and cache files live there. Quick side note – I do not cull in Lightroom. No matter the setup, I find it way too slow due to the idiotic insistence on pre-rendering RAW files. Instead, I use Photo Mechanic by CameraBits (more on that in a future post).

Interestingly, Lightroom is really “chatty” with catalogs and cache, but not so much with the native RAW files. When editing photos, sorting or adjusting metadata, Lightroom “talks” most to the catalog and cache files. Also, it does so in small chunks of data. It rarely references the native files at all. This means that the most accessed data (catalog and cache) should live on the fastest disc. Because the native photos files aren’t accessed much, they have the freedom to live anywhere. Sure, you could also put them on your fastest disc. However, if you managing an archive as large as mine, that could get really expensive.

So what’s happening under the covers? Imagine a hard drive is a popular grocery store on a Sunday just after church let’s out. It’s a busy time with many shoppers buying lots of things. Upfront are the registers with lots of people waiting in line. Just like the grocery store, your hard disk has a line, or queue. When not much is happening, the queue is essentially zero. However, when lot’s of data is being written, the queue can get rather long. Even worse, when lot’s of people are buying just one or two items, the lines are insane. Just like the grocery store, writing lots of little data bits to a disk can really slow things down. As you work, Lightroom needs to write lots of little updates to the catalog and cache. Therefore, the queue can get long and performance suffers. To combat this, we simply use faster and faster disks. Hence, raw disc speed and the speed of the connection is important – primarily for the catalog/cache disk.

For Windows users, you can monitor the disk queue by opening the Task Manager, then select the Performance tab and lastly click on Resource Monitor (admin privileges required). Look for “queue depth” under the disk section. Queue depths of 0-1 is essentially idle. Depths of 2-5 are busy. Anything more is swamped.

Want some other ideas to speed up Lightroom and your photo editing. Try the ideas below. I’ll be explaining these in detail in a future post –

That’s all for today. Happy “wed-iting.”